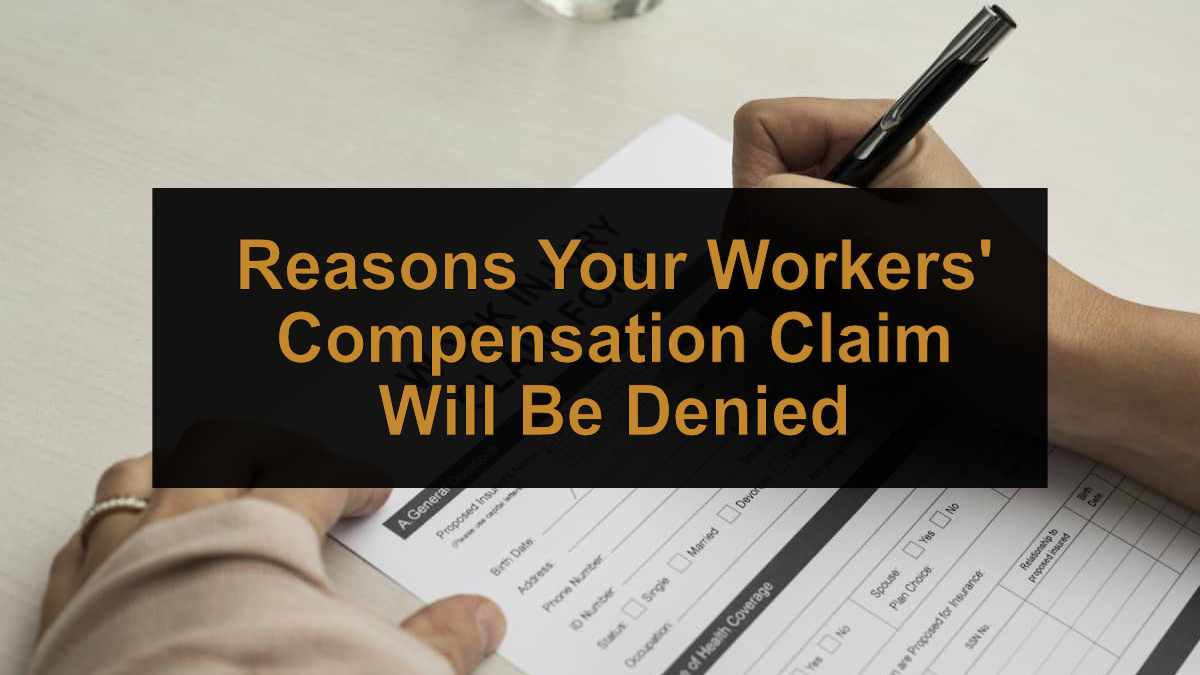 One of the most stressful and difficult situations that you can encounter following a work related injury is to receive a denial of your claim for Workers Compensation benefits from your employer or their insurance carrier. Often, we receive calls from people who are seriously distressed after they have become disabled because of a work-related injury and thought there would be no problem with their claim being approved.  Many are now in desperate need of workers’ compensation benefits to pay their bills, but have been notified that their claim is being denied. Unfortunately, despite what many people may think, a workers compensation insurance carrier will not just take your word at face value in deciding whether to pay you benefits. In fact, in most situations, they are looking for reasons to deny the claim, not reasons to accept it. Based upon our decades of experience in handling workers compensation claims, we decided to list five of the most common reasons that a claim is denied, with some suggestions on what to do to avoid this being a reason for a denial if you are injured at work.

Failure to promptly notify your employer of the injury.

Under the Pennsylvania Worker’s Compensation Act, an employee has up to 120 days in which to report an injury. However, failure to report an injury promptly is often a reason that a workers’ compensation claim ends up being denied. Often, we see clients who sustain what they think is going to be a very minor injury, only to have it get worse over the next several days. When they then report that they were injured, the employer often is skeptical about whether the injury actually occurred at work, because it was not reported immediately. It is therefore always advisable, even with an injury that seems to be minor, to report it to your employer as soon as possible. Many employers even have employee policies that state all accidents are to be reported immediately, which is even more reason to report all injuries immediately. It is also helpful to document that you did report the injury, either by receipt of a copy of a written accident report (if your employer prepares one), or by some written follow-up by you confirming that you reported the injury, whether it’s through an email, text message or even an old-fashioned letter, as long as you keep a copy of it for yourself.

Waiting too Long to Get Treatment

Some people have work-related injury, report them promptly but do not seek medical treatment. Perhaps they feel that they can “tough it out” or they can “work through it”. Often times many weeks go by before the realization occurs that something is seriously wrong. By the time treatment is obtained too much time has elapsed between the date of injury and the date of treatment. This lapse in time is often used to deny a claim. It is suggested that trying to be tough and ignoring the problem hoping that it will go away is not the recommended course to pursue. Rather, a visit to a doctor following an injury is the best way to ascertain the seriousness of the injury. In short, don’t be tough and don’t self-diagnosis. Get a professional opinion.

Lack of medical support/documentation for your injury.

When we are initially contacted by someone following a work related injury, one of the questions that we ask them is whether the physician that they have been treating with for the work injury has confirmed, in writing, that they have sustained a work-related injury and required treatment or need to be off work because of the injury. In many instances, the injured employee that we are speaking with simply does not know. Often, the doctors that are involved in treating work injuries are focusing on treatment, and not the paperwork that is necessary in connection with the claim. It is therefore a good idea to get something in writing from the doctor yourself, confirming that you are treating for work injury and that you have been removed or are restricted from work if that is the case.

Pennsylvania law states that any condition that is directly caused by your employment, or that is aggravated or accelerated by an incident or activities at work, is a work-related injury. Despite this, if you have a pre-existing condition, such as a prior knee injury, and then you sustain a new injury to your knee, many times the insurance carrier will deny the claim and attempt to argue that your problem is related to the pre-existing condition. In this type of situation, it is always important to be completely honest about your pre-existing condition, and explain both to your employer and then the doctor that you treat with what has changed because of the work injury. You will need to get the doctor to document that your problem is due to the new event or activity that caused the problem, rather than the pre-existing condition.

Whenever you report your work injury, typically your employer will ask you questions about how it occurred. When you then see the doctor, you will be asked similar questions. It is important that your answers remain consistent and accurate at all times. In particular, doctors’ offices often take a very abbreviated history of what occurred, and in many occasions record things inaccurately. Exactly how you were injured isn’t really important to the doctor in most situations, but it is critical to your legal claim. Make sure that you are very clear about how your injury occurred, and try to make sure that you find out what the doctor, or his staff, is writing down about your injury. One of the best ways to handle this is to be accurate in the patient intake form that most every doctor’s office uses with new patients. Also, do not be afraid to ask for copy of the forms that you fill out at the doctor’s office, so that there can be no question about what you wrote down if later you have a legal dispute about your case.

Waiting too Long to Get Treatment

Some people have work-related injury, report them promptly but do not seek medical treatment. Perhaps they feel that they can “tough it out” or they can “work through it”. Often times many weeks go by before the realization occurs that something is seriously wrong. By the time treatment is obtained too much time has elapsed between the date of injury and the date of treatment. This lapse in time is often used to deny a claim. It is suggested that trying to be tough and ignoring the problem hoping that it will go away is not the recommended course to pursue. Rather, a visit to a doctor following an injury is the best way to ascertain the seriousness of the injury. In short, don’t be tough and don’t self-diagnosis. Get a professional opinion.

If, at the time of your injury, you have an ongoing dispute or issue with your employer over some other matter, you are in the middle of the grievance, or there is a potential strike or plant shutdown where you work, the insurance carrier will deny all but the most obvious work related injuries. As we noted previously, insurance carriers will not take your word for things, and will be looking for some reason to deny your claim. If your employer suggests that you may have an ulterior motive for making a workers compensation claim, and your injury can be questioned in any way, your claim is likely to be denied. If you are proceeding without legal assistance in the early stages of your claim, you should never complain about or discuss issues related to your employment with the insurance adjuster that are unrelated to the actual injury itself.

Even if you do everything possible to avoid giving the insurance carrier a basis for denying your claim, many legitimate claims are denied. We have been successfully representing people with claims of this nature for over 50 years. By doing what you can to eliminate additional issues from being part of your case, you improve your chances of success. Hopefully, these tips can help you to avoid inadvertently creating additional reasons why your workers’ compensation claim is denied.